On Monday 5 October I attended a talk on British women in Serbia in the First World War. Many of these women are well known in Serbia, although barely known in the UK. Around 3,000 foreign medical workers served in Serbia during the war, of whom approximately 700 were from the Scottish Women's Hospital (SWH). Not all the volunteers were Scottish - they were international - but they were all women.

The SWH is becoming better known as the WWI Centenary progresses. At the outbreak of war Elsie Inglis, an Edinburgh doctor, approached the War Office in Britain and offered to provide a hospital, fully staffed by women, to the British Army. She was told to ‘go home and be still'. She did not. Although the British Government declined the offer, others including the French, Serbian and Russian governments gratefully received it. In total SWH funded and provided fourteen hospitals during the war. 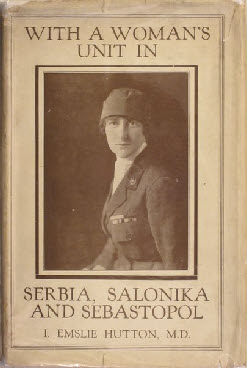 1915 was the worst year of the war for Serbia. At the beginning of the year a terrible typhus epidemic spread rapidly across the country. Despite the enormous risks and dangers the women volunteers already in Serbia remained, and many more came. The death rate amongst medical workers was particularly high. But that was not all. In October 1915, a few months after the epidemic finished, the Central Powers invaded and the Serbian Army was forced into retreat. Again, the women volunteers supported the Serbian Army, travelling with them through the harsh winter conditions. Some, like Flora Sandes, despite having been back in Britain recuperating from illness, returned to Serbia to help.

Why did these women give up often comfortable lives, travelling in dangerous conditions to far-off lands and giving their help, and often their lives, for people they did not know? There were many reasons; ranging from an adventure or to use skills not valued in Britain, to simply being useful. Many of them had been involved in the suffrage movement. They varied from women who wanted to be soldiers, such as Flora Sandes, to pacifists such as Mabel Dearmer. They quickly learned to care for the Serbian people, who they communicated with via gestures, second languages, newly learned phrases of Serbian, or via third party interpreters (such as the Austro-Hungarian prisoners, working as medics and hospital orderlies). In return, the Serbian soldiers trusted, valued and loved these women (Mabel Stobbart was known as ‘little mother'). In Serbia, there are monuments to these women. Streets and hospitals are named after them. A drinking fountain commemorates Elsie Inglis, reflecting her particular focus on sanitation. The British Ambassador's residence in Belgrade has also recently been named after her. Every 14 February there is a service in Kragujevac to remember Dr Elizabeth Ross (who died on that day in 1915) and the other women. One hundred years later, they have not been forgotten by the country they helped at such cost.